The first block for the charity quilt is finished, using Ineke's fabrics. Thanks again, Ineke! 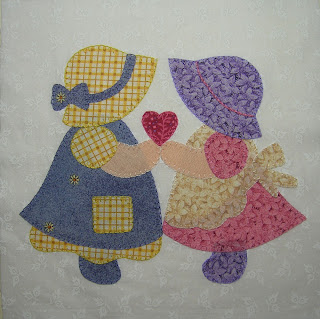 I'm working on several blocks simultaneously now, so it could take a while before I have another update for these blocks. 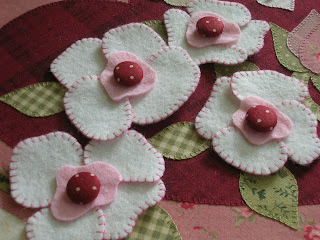 I thought the pretty flowers on Vintage Valentine's block 3 deserved a close-up picture, since the picture I posted the other day didn't show much detail. 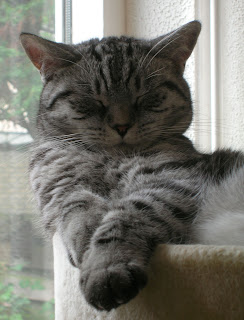 And of course I have to end this post with a picture of my Furry Helper (a.k.a. the Ort Master), who - thankfully! - seems less and less interested in my stitchy endeavours. He prefers to have a snooze nearby and keep an eye (or so he says) on what I'm doing.
He recently became an 'uncle', because his sister Kira had four kittens last week. Just as well that they're all spoken for ;o)

OMG! What cute little girls; what beautiful flowers and what a happy, content kitty!;)

Your background fabric is so pretty!

I love the 3d-ness of the flowers - it's much easier to see in this new picture. And Kruimel is as adorable as ever! Great pictures on all fronts.