Panic over, translation completed. Thanks for all your encouraging comments. Now I need to wait until I get feedback from the publisher's, which gives me time to catch up on my My Garden project by Lynette Anderson. Here is block 6, not yet with the courthouse steps border strips: 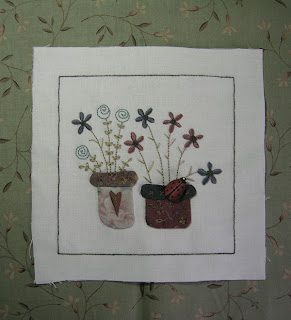 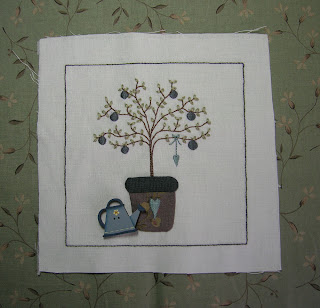 And this sweet little cottage for block 9: 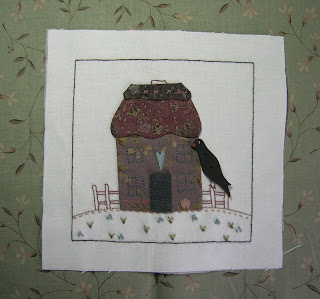 What I did not tell you (for obvious reasons) is that I was away. I travelled to my beloved Scotland and it was such a joy to actually get to go there after two cancelled holidays due to a volcano in Iceland and an operation.

This is a beautiful area on the Isle of Harris called Seilebost. The colours of the sea and sand are just amazing. 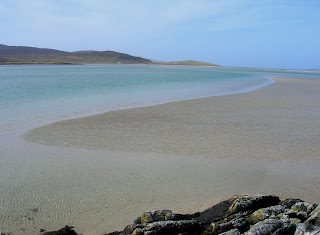 And I met these cute sheep when I stopped to take a picture of the landscape in the background. They made for a nice foreground! These images will be used as inspiration for some painting tuition which I have coming up next week. 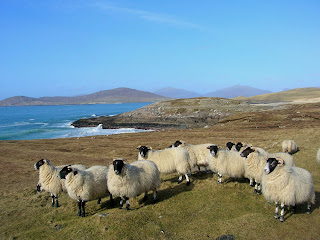 And guess who was really happy when 'mummy' came back after having been away for such a long time: 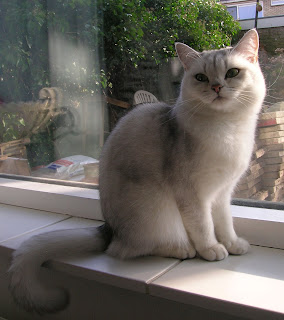 Luna is now nearly two years old. Her birthday is on the 16th of April, but she is still tiny and ever so cute!

Now of course I was going to work on the last stitchery block for My Garden this evening (the beehive, block #7) if it weren't for the fact that Anne Sutton released the new Henrietta Whiskers block a day early!

Off to work on that!

Thanks for your lovely comments.
Posted by Anne Marieke at 21:08

Your quilt blocks are beautiful, Anne Marieke, as are your photos of Scotland. You must have had a fabulous time!!!

Lovely photographs (Scotland and Luna)! And the quilt is looking great - that's a pretty fabric in the background.

The blocks look absolutely adorable. I am new to applique. Do you turn under your pieces? Do you know any places on the web I could go to get cute applique patterns like what you are making. I really enjoy your blog.

Hi Sarah Beth, I have you an URL of Bunny Hill Designs in my previous post, which has the free block of the month (BOM) for Henrietta Whiskers. I think that would be a good place to start if you are new to applique.

The patterns in this post are not free. They are a button BOM by Lynette Anderson which has now finished. Not sure if you could still get the buttons with the free patterns.

In this case I used needleturn, but for Henrietta I'm doing fusible applique.

A good idea if you are new to both techniques is go to Youtube and enter applique in the search box. There are plenty of tutorials out there.