WOW: Flowers For Me & Herbularius 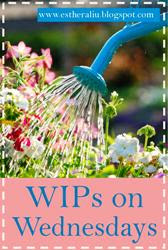 It is Wednesday once more, well only one more hour to go here in Holland, so time for my WOW:

My first block 4: Flowers for Me of Heart's Desire by Esther Aliu is finally done. As far as I can get it done before the centre is pieced, because some of the leaves go onto the next blocks. 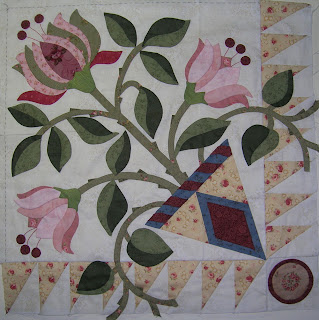 I will be work on this project whilst I do a 'demonstration' of applique at the annual quilt show of the Quilt Guild in the Netherlands on Friday, in Leiden.
My Herbularius has been sadly ignored whilst I'm preparing for the above, but I did make some progress: 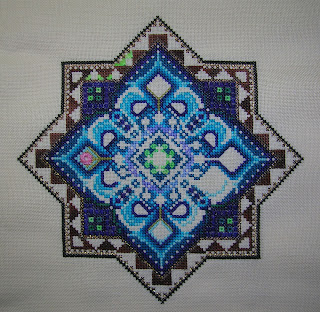 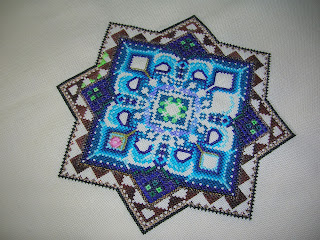 This is Minty, the fourth of our pussycats. She is very shy and frightened of the camera, so it is really difficult to take her picture. She was called 'Minty' by the people of the cat shelter because of the white patch (peppermint) on her breast. She has come along so much since we first adopted her almost six years ago. 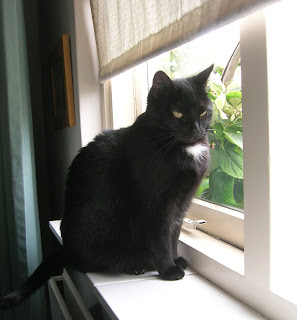 She just would not look at the camera, poor little shy girl.

Thanks for your lovely comments.

I love your tulips, Anne Marieke, and Herbularius is so gorgeous.

Morning!!!!! Your block looks lovely, I really do like those deep maroon circles. I look at wonder at your cross stitch as I use to do it & know how long it takes to make something as intricate as this. Just beautiful. Cheers Glenda

Your work is always so well considered and beautiful Anne Marieke, I do love getting to see what you've been up to!

The herbularius is stunning and your HD block is really special too.

Your quilting is absolutely gorgeous! And so is Herbularius - what a lovely centre! Nice to see Minty.

All I can say is WOW! That quilt block is beautiful. Herbularius is coming along nicely. I too have a shy cat but he's opening up a bit now.

It looks like there was a lot of work in that quilt block, it is beautiful!

Minty is a pretty girl.

Your applique block is so nice - look at those little thorns! Were they hard to do?

And your stitchery has come a long way - it's absolutely gorgeous so far.

For now I will do it like this:
Thanks for all your lovely comments!

@LynCC: no, those thorns are not hard. They are in effect prairie points. I fold square pieces of fabric in four diagonally and then baste the 'thorns' in the right place, ready for the stem to be appliqued over them. Hope this helps, if not, just ask!

Beautiful quilt block. It looks stunning. Love it! And your cross stitch piece is striking as well. The colors are really pretty.