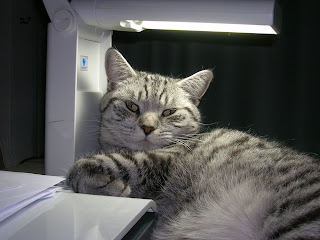 This is getting a bit ridiculous! This is how I found the Ort Master just as I was about to start my stitchy evening, a few minutes ago.

And just for the record: he is currently asleep with his head on my laptop keyboard ;o)

You'd really think he gets no attention at all here, but that couldn't be further from the truth.

Thanks for your lovely comments on my earlier pictures of our furry boy.
Posted by Anne Marieke at 20:47 5 comments:

No Stitching & No Working Allowed 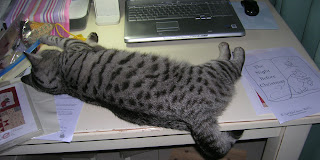 Think our furry boy is trying to tell me something?

It won't surprise you that I still haven't managed to complete block #1 of Night Before Christmas. 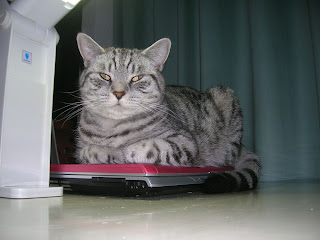 No working or emailing either, for that matter ;o)
Posted by Anne Marieke at 23:28 7 comments: 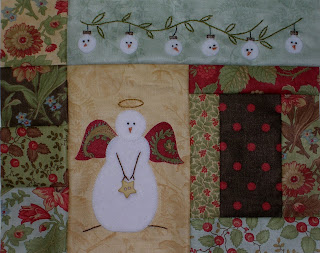 Postcard Cuties for Winter #3 is a snow angel. She's so cute! 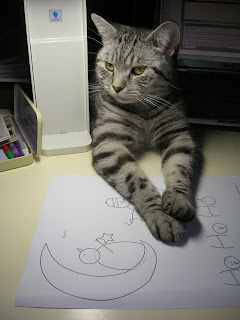 Now I'm *trying* to work on Postcard Cuties for Winter #4. The Ort Master is lending a helping paw. 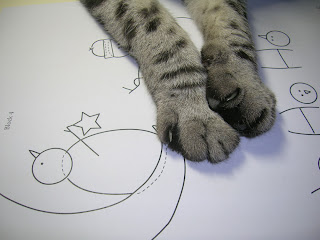 I do love his paws, they are so cuddly! 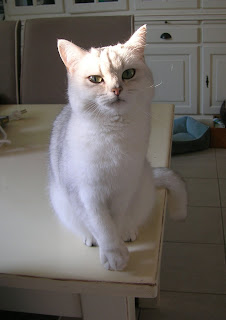 And talking of paws, this is what little Luna does when she's begging for a treat. Is she adoring or what?! I can never resist her when she's looking at me like that and lifting her tiny paw.
Thanks for your lovely comments. They are very inspirational!
Posted by Anne Marieke at 22:53 10 comments:

Last night, Ineke very generously signed me up for the Spring Knotgarden pattern by Châtelaine as a 'get well' present.

This is a companion piece for Frosty Knotgarden (which I have as a WIP) and Summer Knotgarden.

Thank you so much, Ineke! What a lovely surprise.
Posted by Anne Marieke at 09:44 6 comments: 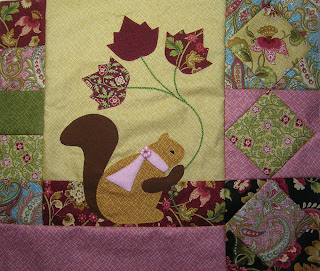 Here she is at last, my Henrietta Whiskers.
This project is a free BOM by Bunny Hill Designs.

I'm using a line of fabrics called Samsara by Bernatex. Henrietta's paw, tail and scarf are made of wool felt. The pink button was given to me by Michele, in one of the great parcels she sent me.

Sorry for the creases. Handling an ironing board is a bit too much at the moment.
Not that I mind ;o) ;o)

o-o-o
Thanks for all your good wishes and comments on my recent operation. The amazing thing is that I was never in pain. I just suffered from extreme nausea and this lasted about two months.

When I woke up from the general anaesthesia, the nausea was gone! Yay!
Posted by Anne Marieke at 13:42 6 comments:

The Reason For My Silence

Warning: if you're squeemish, do NOT scroll down ;o)

Sorry for having ignored you. The reason is that I was in hospital to have my gall bladder removed.

Below you'll see the 'harvest'. They are not even all there, some of them got lost in the process.
Small wonder that I have been feeling rather nauseous recently.....

The operation was done on Tuesday afternoon via laparascopy, which means I now have four 'holes' in my tummy, two larger ones and two smaller ones which resemble crosses (very apt, eh?).

All this means that my poor little Henrietta Whiskers is still not completed, but I'm getting there! Sitting up for too long to stitch makes the incisions feel really sore, so I just have to give in an lie down.

Other than that, I feel reborn. No more nausea, a lot more energy, even only a few days after the operation. YAY! 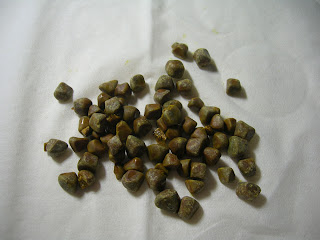 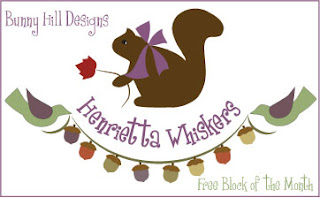 The 2011 free BOM from Bunny Hill Designs has started and the first block is too cute!
Check it out! 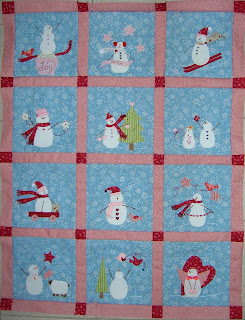 Sorry for the horrible picture. I now understand why Michele always says it is so hard to take a good picture of a quilt top. This is the middle bit of Snowbound, the free 2010 BOM by Anne Sutton of Bunny Hill Designs.

The 2011 BOM is about to start (tomorrow!) and I was hoping to complete my top before then.
But life got in the way and I did complete the middle bit, but not the borders. And above you will find proof ;o)

The theme for the new BOM "Henrietta Whiskers" was announced this evening. Anne Sutton is leaving us guessing till tomorrow. But of course lots of thoughts are crossing my mind: rabbit? squirrel? cat? What else has whiskers? 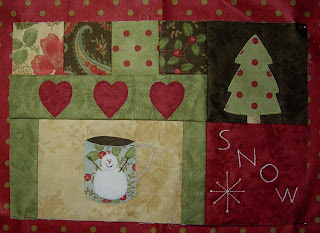 Last week I also completed block 2 of Postcard Cuties, also by Bunny Hill Designs. These blocks are quite small. This whole block is about the size of an A4 sheet of paper. Block 1 was even smaller. Great fun to stitch! I'm still waiting for the embellishments to arrive from across the pond.
Today I received word that the first block of The Night Before Christmas (yes, also by Bunny Hill Designs) was posted out to me. I cannot wait to see the beautiful fabrics and the cute pattern.
Thanks for all your good wishes for this new year 2011!
Posted by Anne Marieke at 23:31 6 comments: 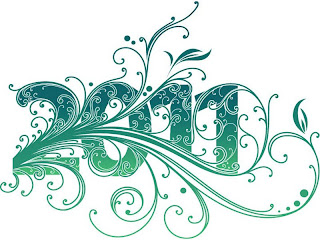 Wishing you all a very Happy and Healthy New Year!
May all your dreams come true.
Posted by Anne Marieke at 00:30 6 comments: