Thanks for all your good wishes for our poor little Luna.

Here she is the day she got home from the clinic. I picked her up Thursday afternoon.
She spent the evening snoozing on the settee, feeling rather worse for wear. 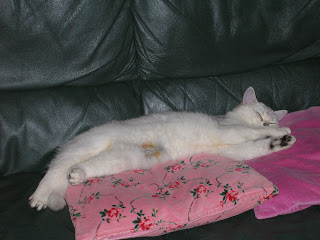 And here she is today, much perkier and happier. 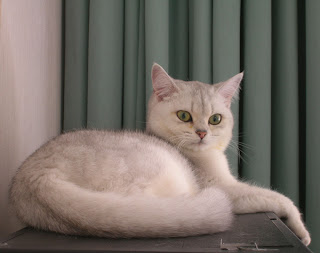 Last time, I promised to introduce you to our fourth cat: Minty.
The people at the shelter called her 'Minty', because she has a 'peppermint' on her breast. We decided the name suited her. We adopted her in January 2006 when she was approximately 8 months old. She had been found in the countryside three months before we met her, and she was not at all used to humans. Now she is very cuddly when she is alone with us, but she is very frightened of our two furry boys: Elvis and Kruimel, who don't understand her body language and chase the poor little girl. 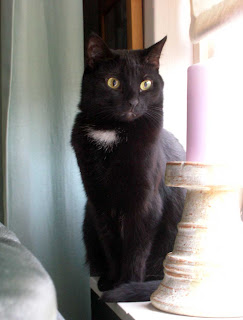 On the stitching front, I'm still working on Leanne's House # 2. Part 3 arrived in the post today, as did part 9 of Tail Feathers quilt.
Frosty Knotgarden by Chatelaine is also calling out to me, so who knows what will happen after I complete block #2 of Leanne's House.
Posted by Anne Marieke at 21:46

Oh, my...poor little girl! I am glad she is starting to feel better so quickly. :))

And look at pretty Miss Minty! She looks so regal!

Minty is a real beauty!
I am glad Luna is feeling better so soon after the operation.